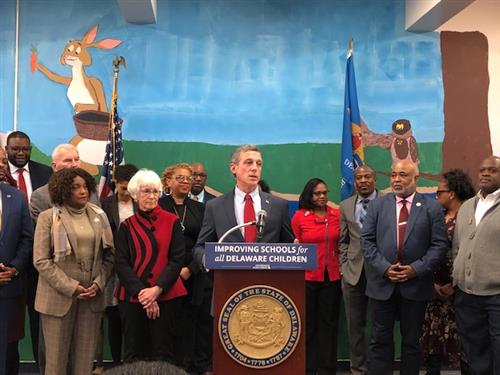 When Governor Carney releases his Fiscal Year 2021 budget, he will propose $50 million to partner with Christina School District to fund a new school on the east side of Wilmington to replace The Bancroft School – the first new city school in a generation. Governor Carney also is proposing major renovations to Stubbs Early Education Center and The Bayard School. Governor Carney will release his budget proposal on Thursday, January 30th.

“We look forward to working closely with Christina, and members of the community, this is a major investment in the children of our city and state,” said Governor Carney.

Governor Carney, legislators, and advocates also toured the new Dual Generation Center at Stubbs on Wednesday. The facility provides pre-K and kindergarten for Wilmington children on the first floor and services for adults – including job-related support and social services – on the second floor. The center also has a clothing closet and food pantry. At Elbert-Palmer Elementary, Gulftainer is working with the International Longshoremen’s Association to build a workforce training facility for the future Port of Wilmington workers.

“Modernizing our schools has been a vision of CSD leadership for some time. We are appreciative of Governor Carney for this meaningful investment. This will provide many opportunities for our students and promote a sense of community that helps each child and family feel connected and valued,” said Superintendent Rick Gregg.

“I want to thank the Christina School District and the dedicated men and women who are educating our children,” said Senator Elizabeth “Tizzy” Lockman. “Schools are more than brick and mortar. They are a beacon in a community, symbolizing our collective hope for a brighter future.”

More information will be provided as it comes available.